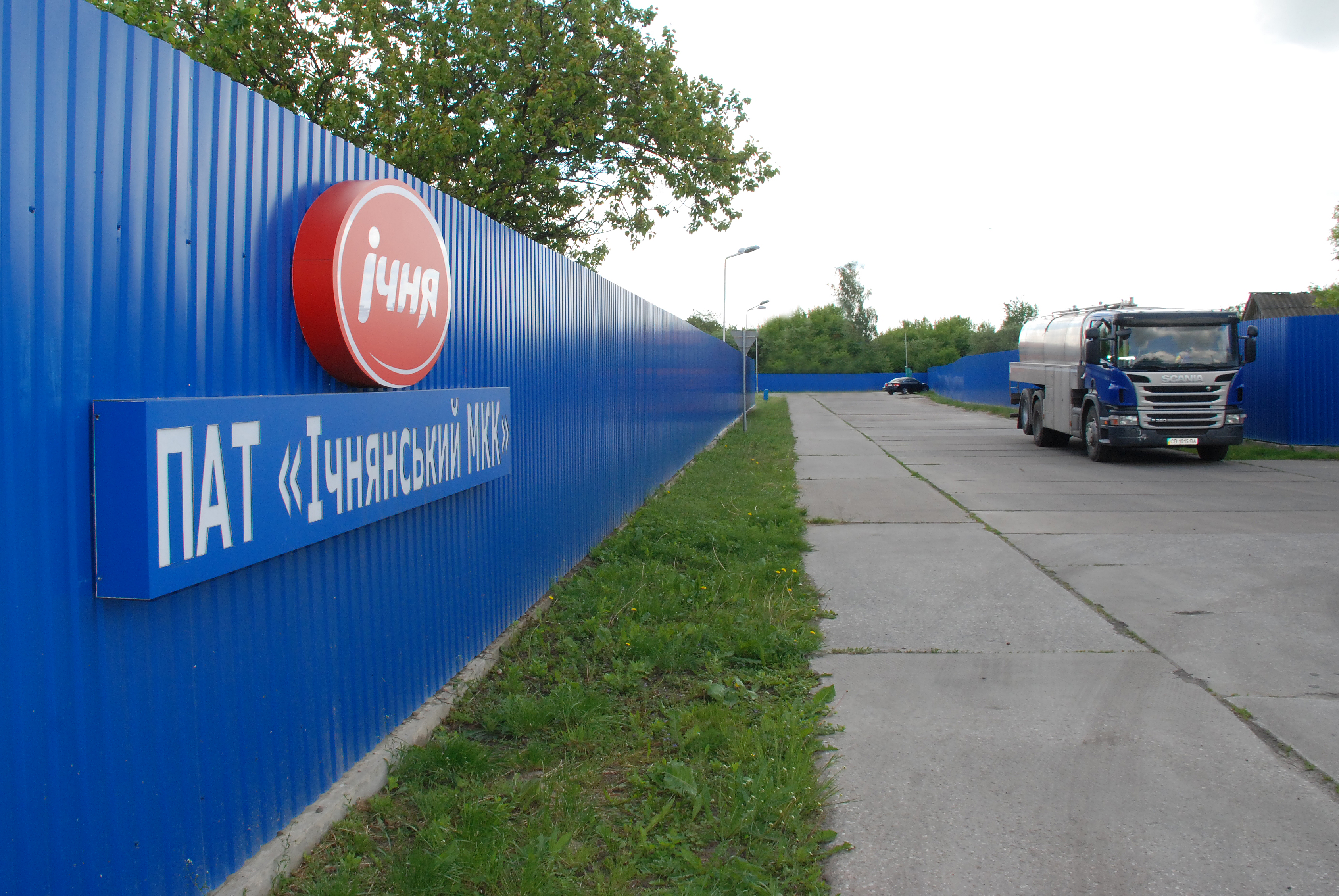 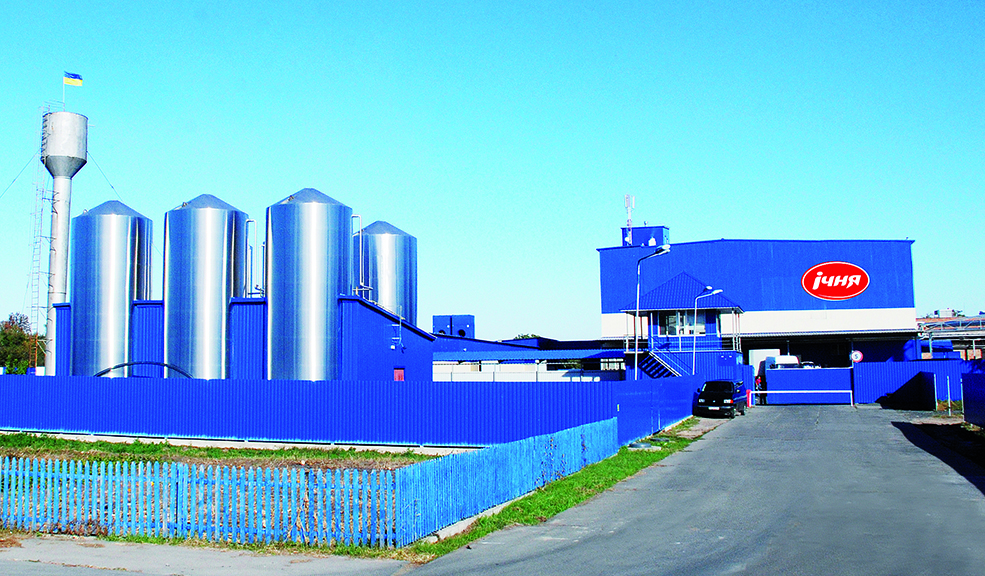 1958 – establishment of the State Company Ichnya Food Factory
1995 – the company was transformed in Ichnya Food Plant, JSC
2006 – the name of the company was changed to Ichnya Condensed Milk Company, JSC
2007 - Ichnya Condensed Milk Company, JSC launched the operations after the first phase of overhaul and modernization. Large scale overhaul was held within the framework of the loaning project of Nadra Bank supported by Ukrainian League of Industrialists and Entrepreneurs.
Large-scale overhaul works performed since November, 2006, to March, 2007, included:

Due to modernization of production facilities, successful choice of development strategy and innovative approach to production process management, and diversification of sales channels the company has achieved impressive results throughout the short time:

Despite the financial crisis of 2008-2009 the company develops steadily.

Currently the enterprise performs the second phase of overhaul and construction of the second production line to become the most modernized and capacious producer of the sweetened condensed milk and canned milk in Ukraine. 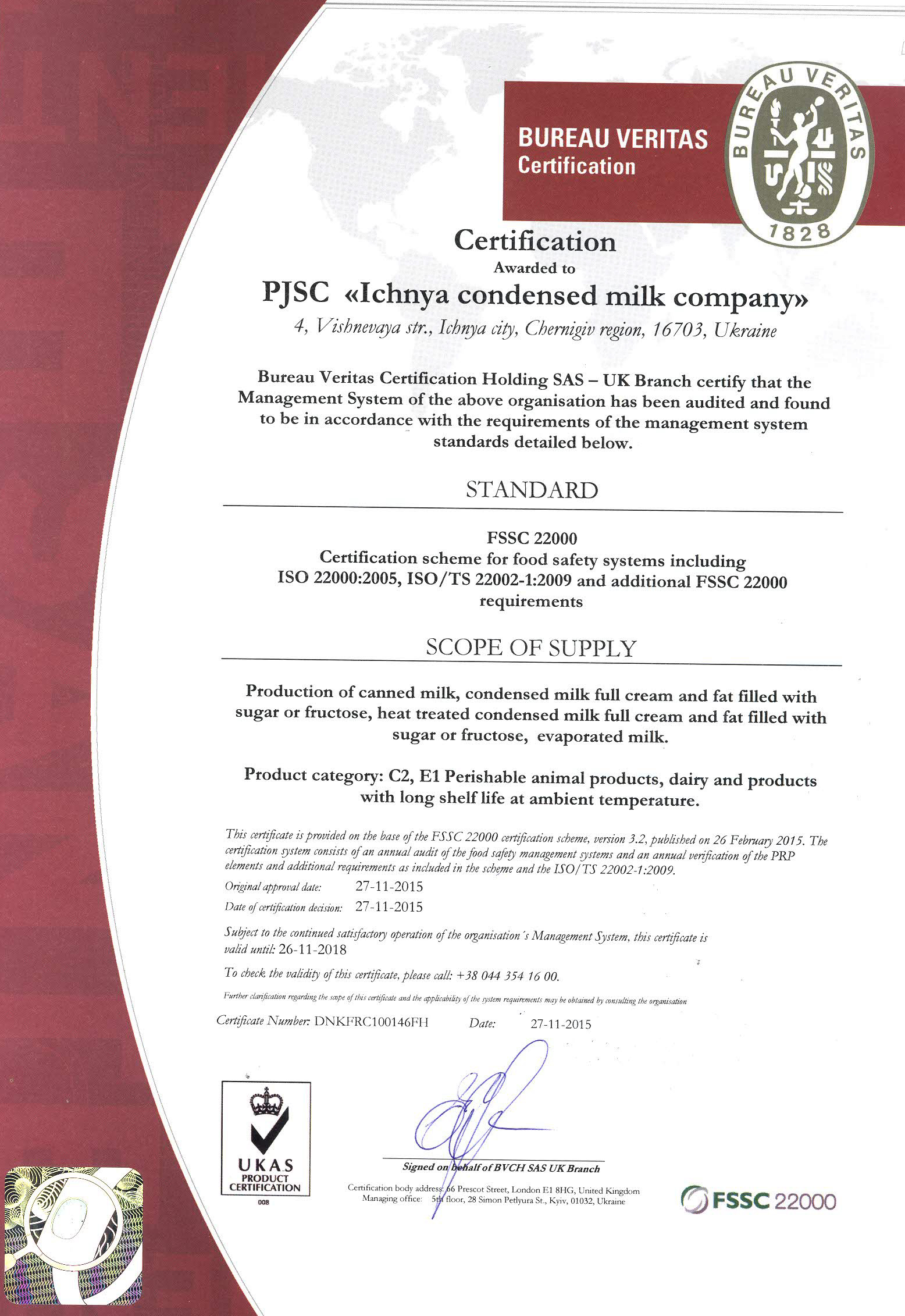 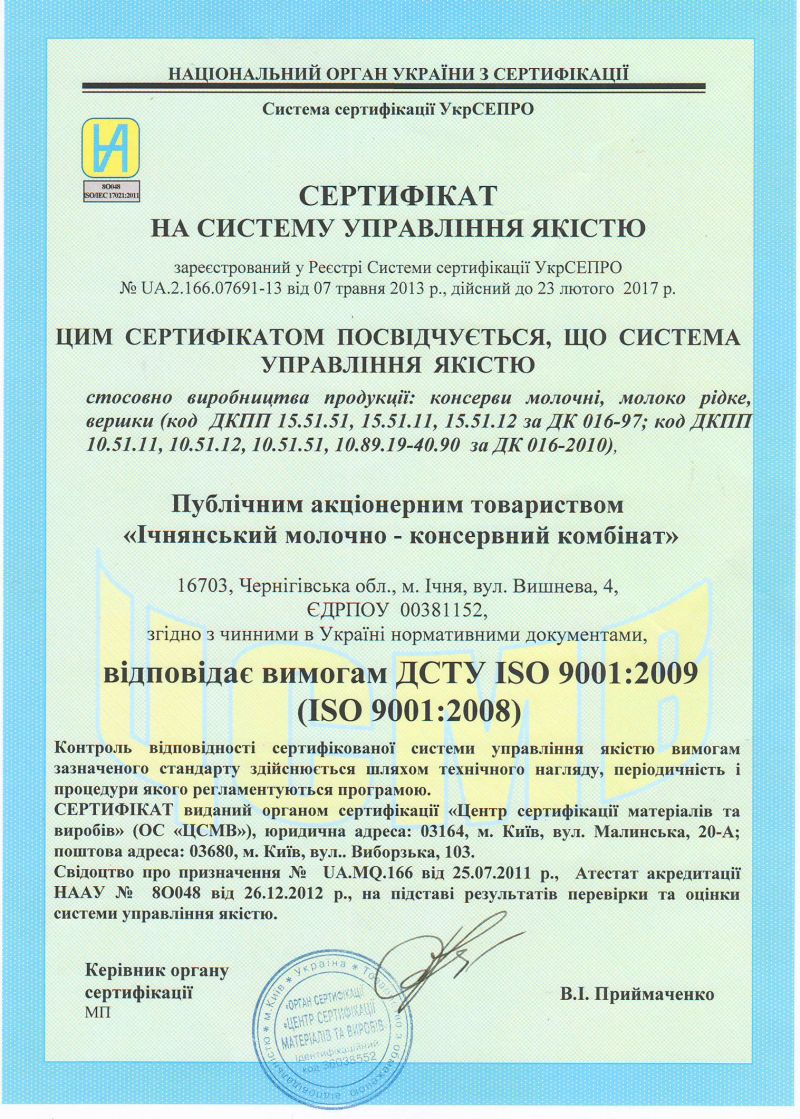 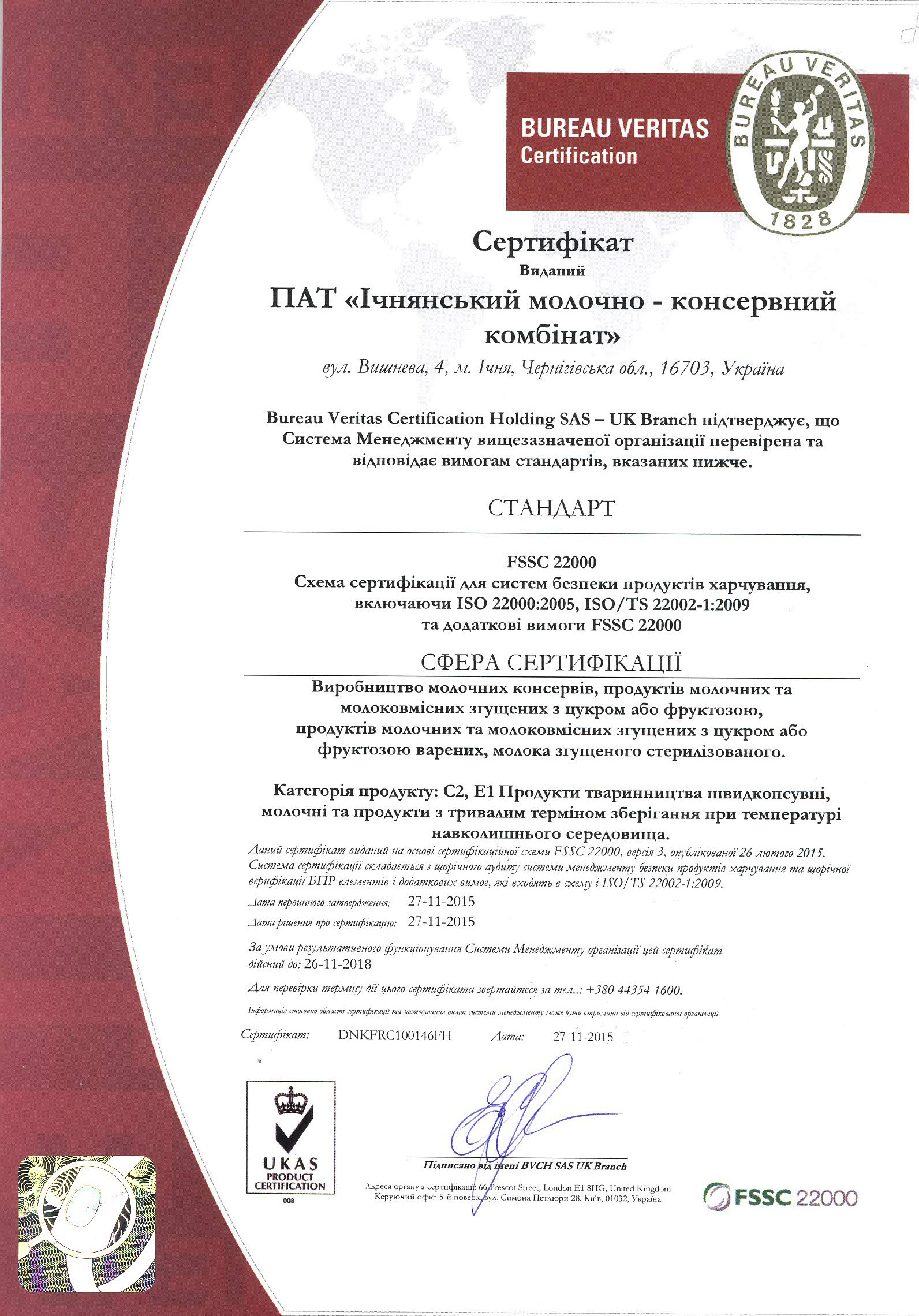 Production facilities of Ichnya Condensed Milk Company are located in clean environment of Southern East of Chernigov Region of Ukraine, in the town of Ichnya at the border with Poltava Region. The location is renowned for its not having big factories, for refined environment and traditional high milk output. Hetman National Landscape Dendrology Park and National Histrical Landscape Monument Kachanovka are in close vicinity to Ichnya Condensed Milk Company.
Production capacities of the company include milking enterprise providing raw materials.

Due to the best-balanced offer of price-quality products of Ichnya Condensed Milk Company have won the preferences of the consumers in Ukraine and 28 countries of the world for two years.

State-of-the-art laboratory, specialized tasting room function at the company; regular quality control is performed at all stages of condensed milk production – from feed-in of the raw materials to ready product, namely:

– control of quality and microbiology at feed-in of the raw materials;
– control of technology observing at production;
– control of samples of ready products;
– tasting of own and competing samples.

Besides, random control of samples is performed at the laboratories of the State Committee of Ukraine for Technical Regulation and Consumer Policy.
New cutting-edge equipment, permanent personnel capacity building, own research and development capacities supervised by the leading experts of the Russian Milk Institute enable the company to manufacture the best quality product and improve technologies to get the products unprecedented in Ukraine and CIS.
Ichnya Condensed Milk Company, JSC operates under internationally recognized quality management system FSSC22000. As well as the certificate of ISO 22000: 2005 and the basic program - ISO / TS 22002-1 (PAS 220).

Currently the enterprise is subject to NASSR certification (product quality control system certification) adopted in EU as the most stringent, updated and effective product quality control system which allows the company to produce condensed milk of the highest quality following the world standards and unprecedented in CIS. What is more important, it allows harmonizing of the Ukrainian quality standards with the world and EU quality standards. 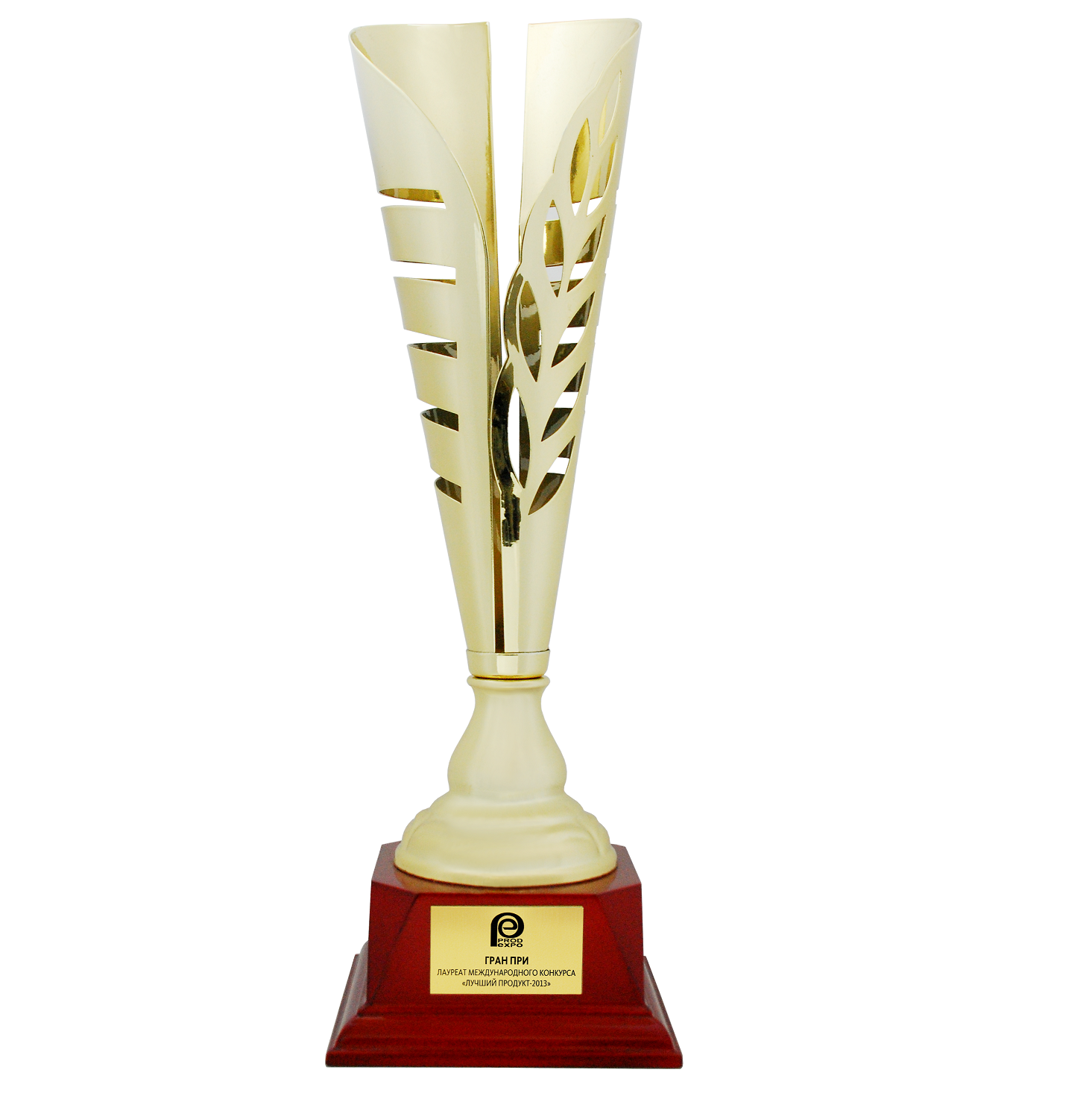 Condensed milk TM "MamaMilla" recognized as the best product of 2013

"Whole condensed milk with sugar" from TM "Mama Milla", produced by the Ukrainian PAO "Ichnyanskiymolochno cannery", recognized by leading experts as the best product at the International Exhibition of food products, beverages and raw materials for their production "Prodexpo-2013" in Moscow. The product was awarded the winner of the Cup Grand Prix winner of the international contest "Best Product 2013". Drinking and condensed milk production SC "Proviant" have been named Product of the Year at Russia's largest food exhibition World Food Moscow. The international professional competition of food and beverage product-Year 2011 of the Civil Code "Proviant" and "Ichnyansky Milk Plant" were awarded gold medals for two product lines: UHT liquid milk and a new condensed milk premium - TM "MamaMilla". 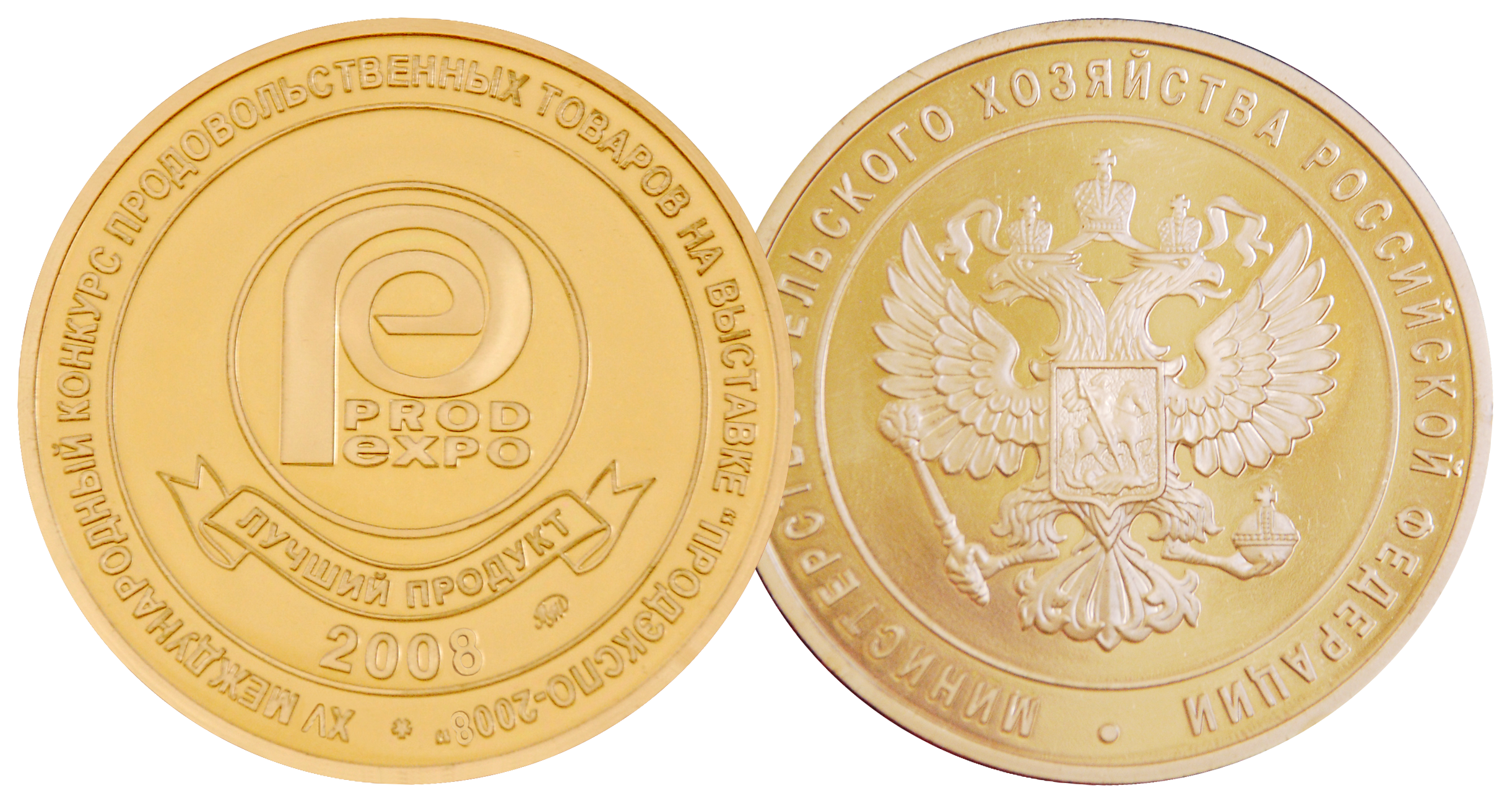 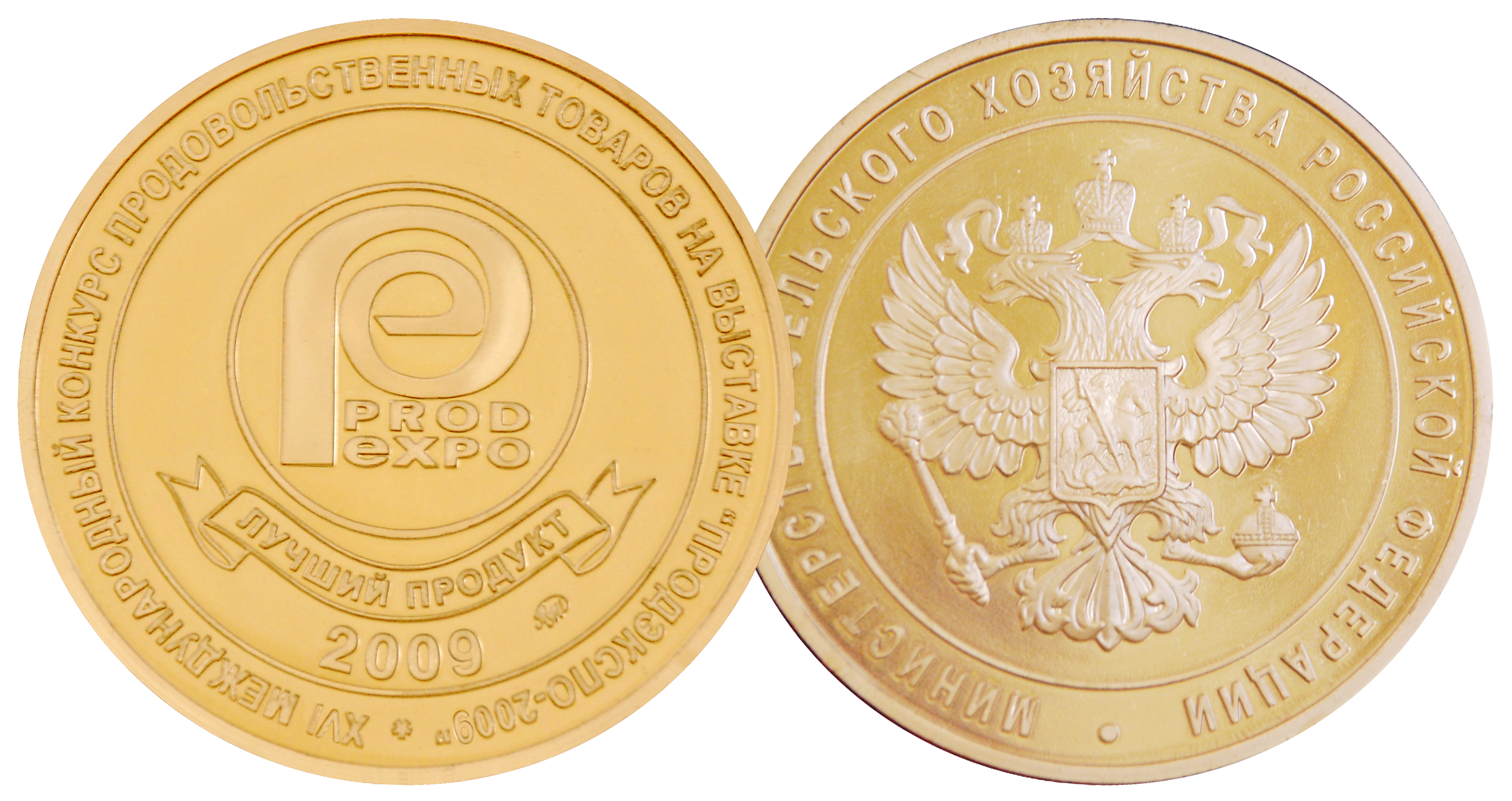 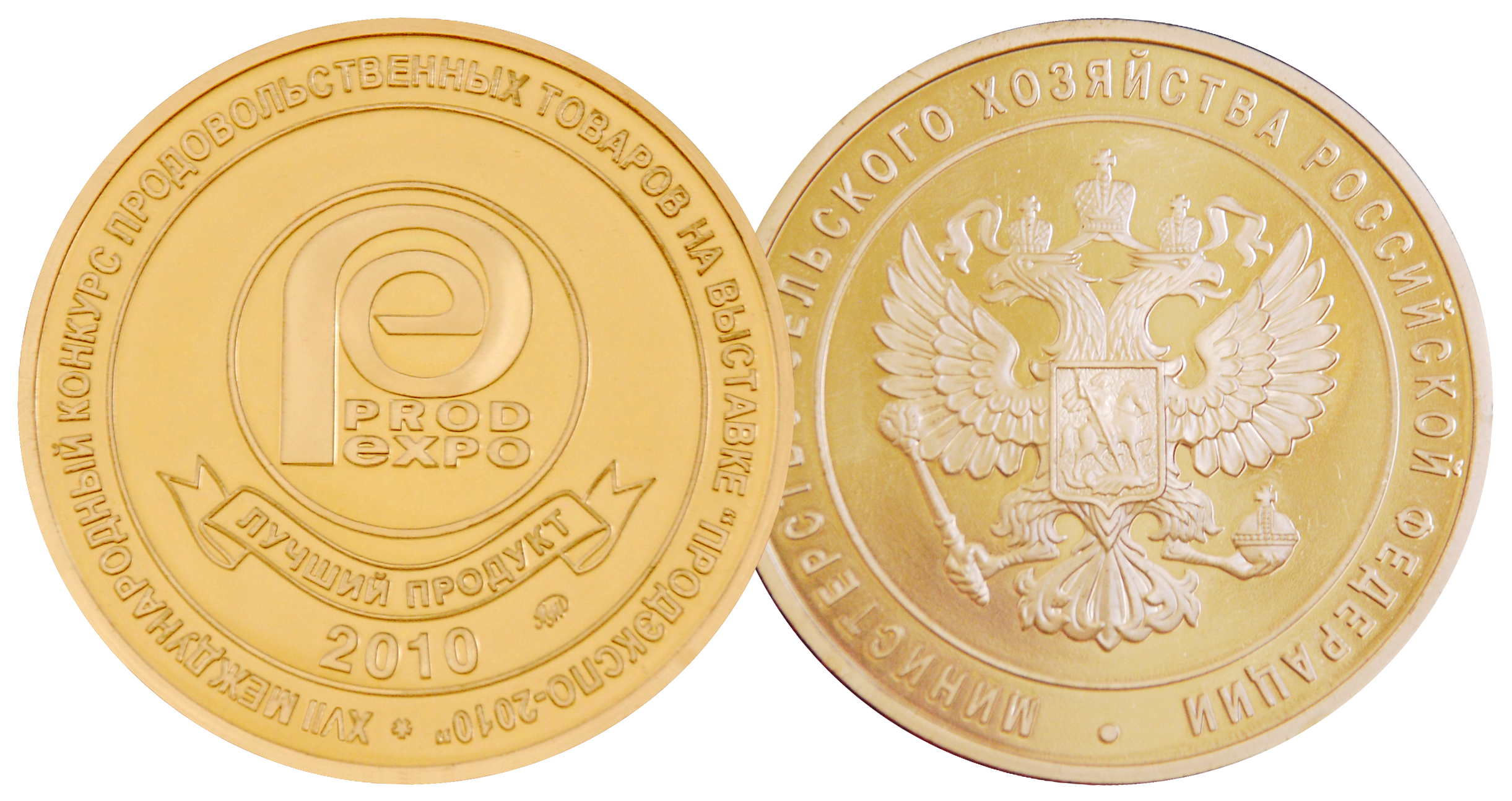 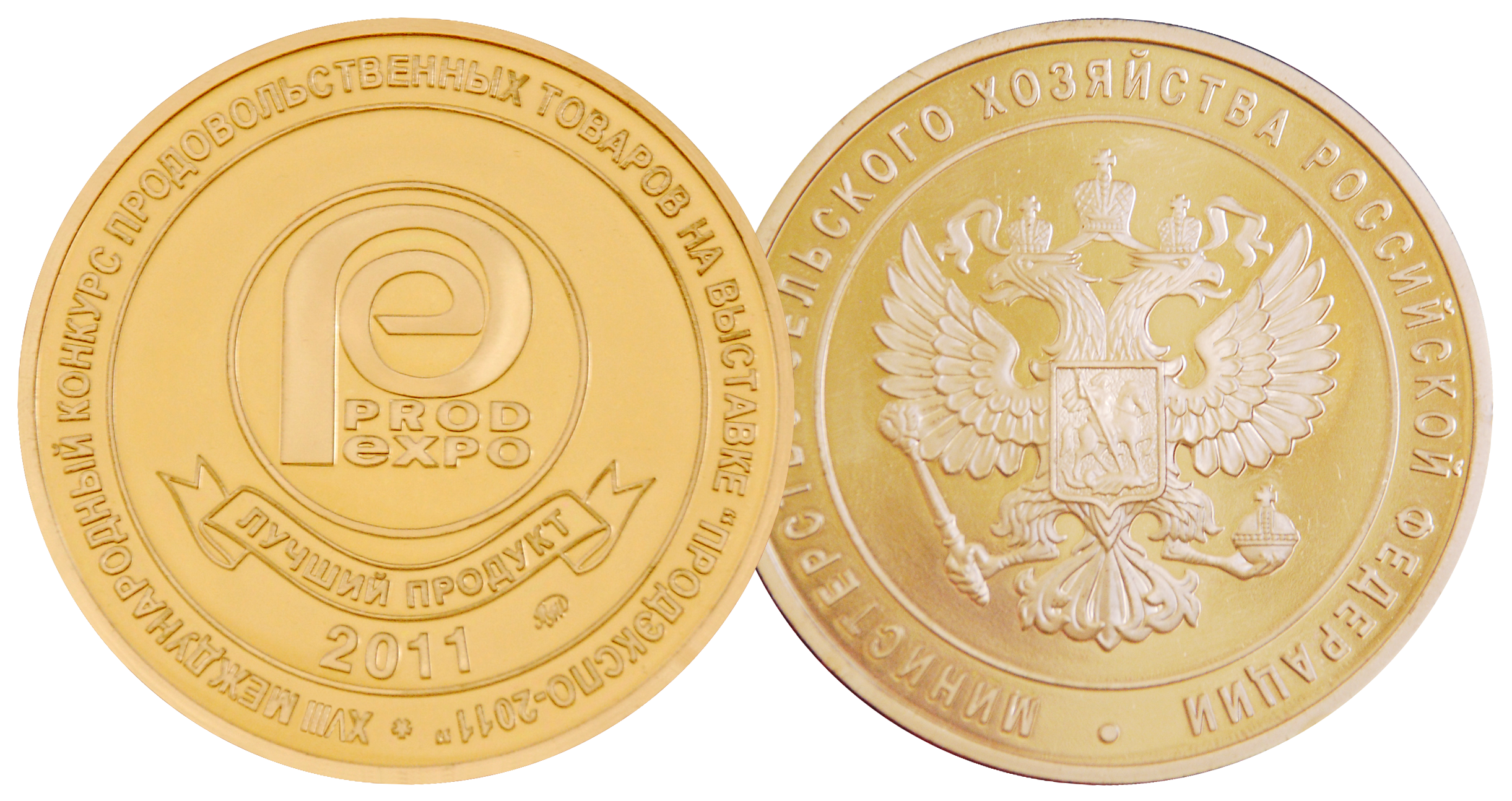 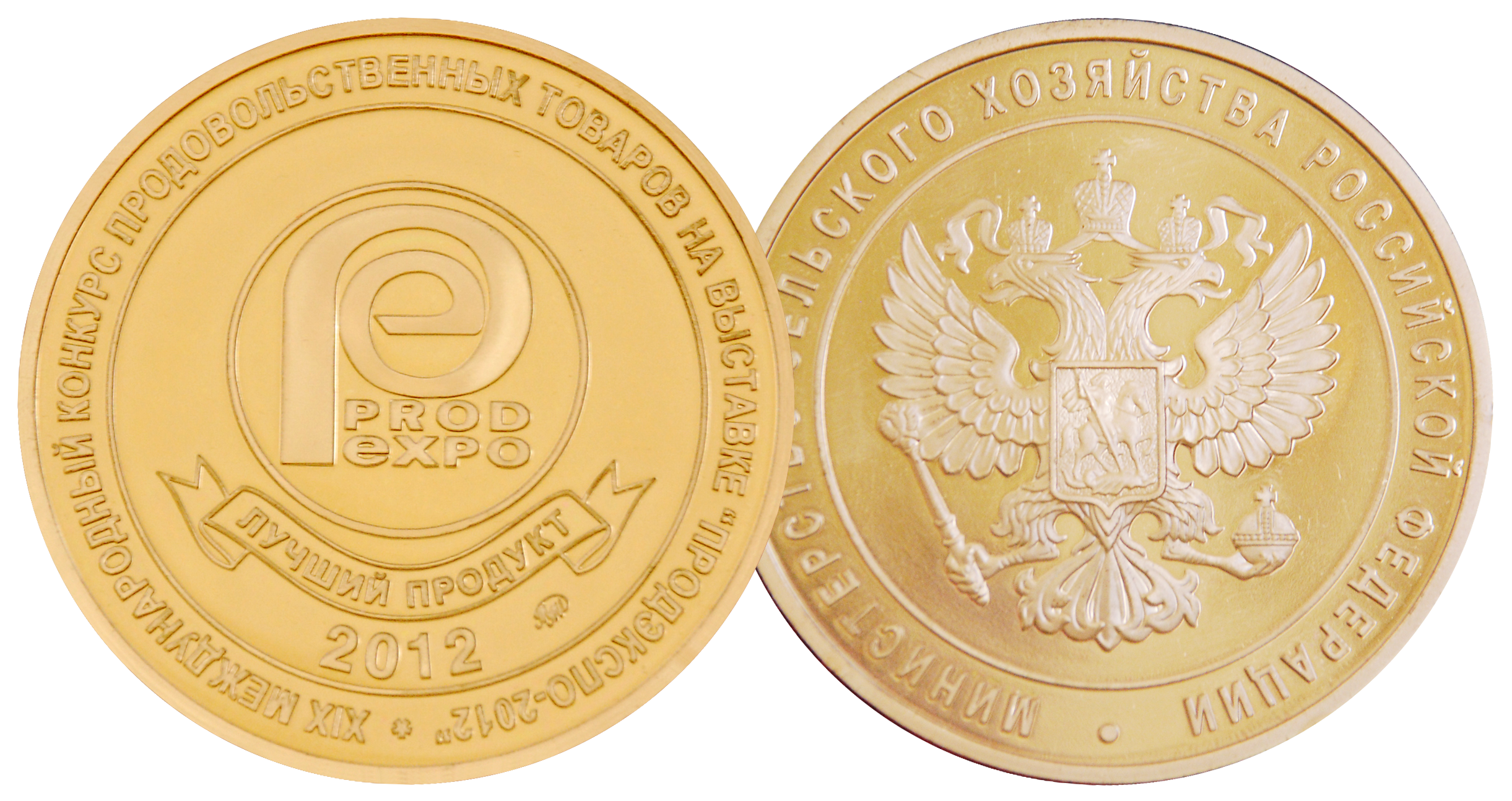 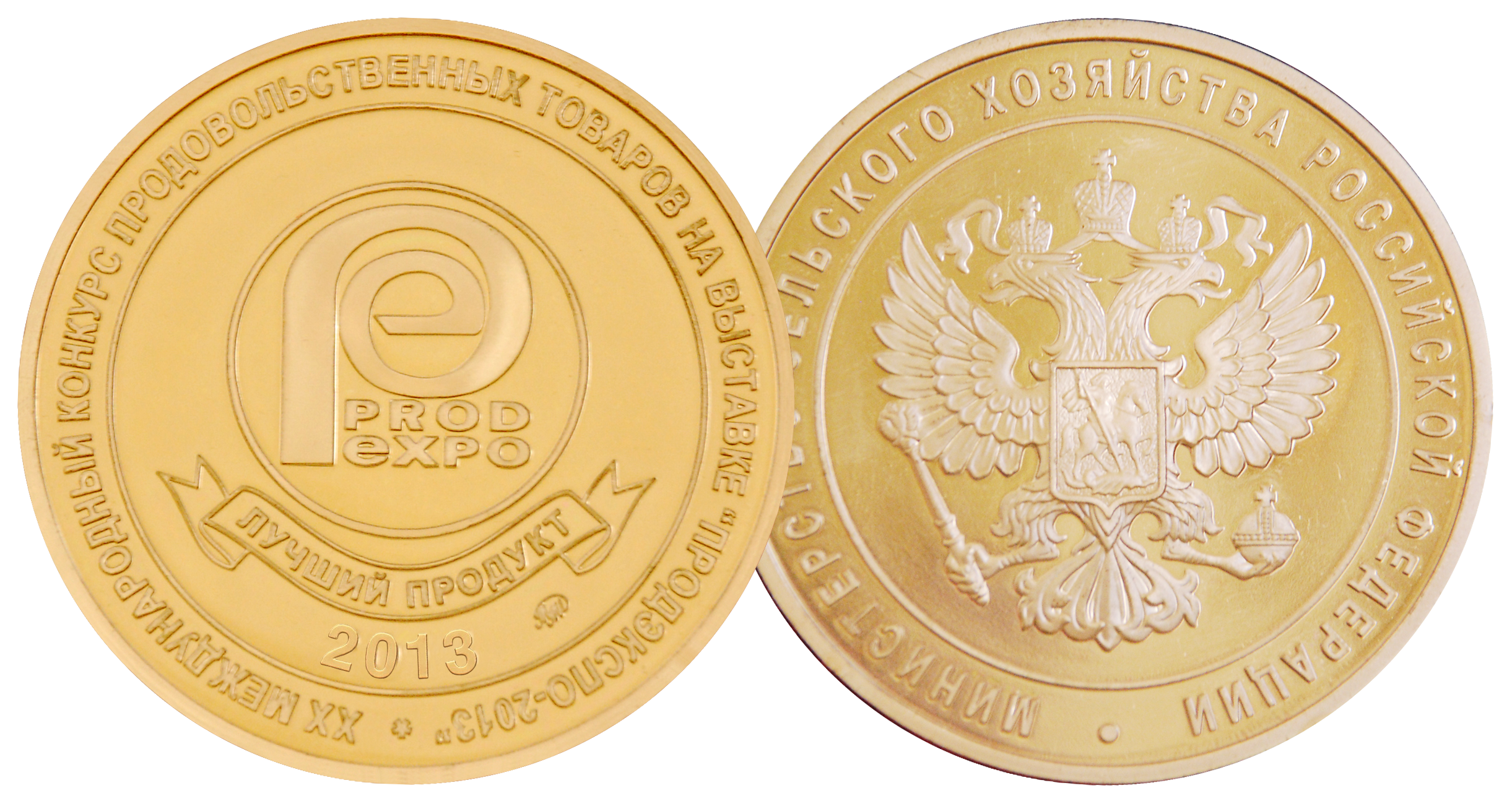 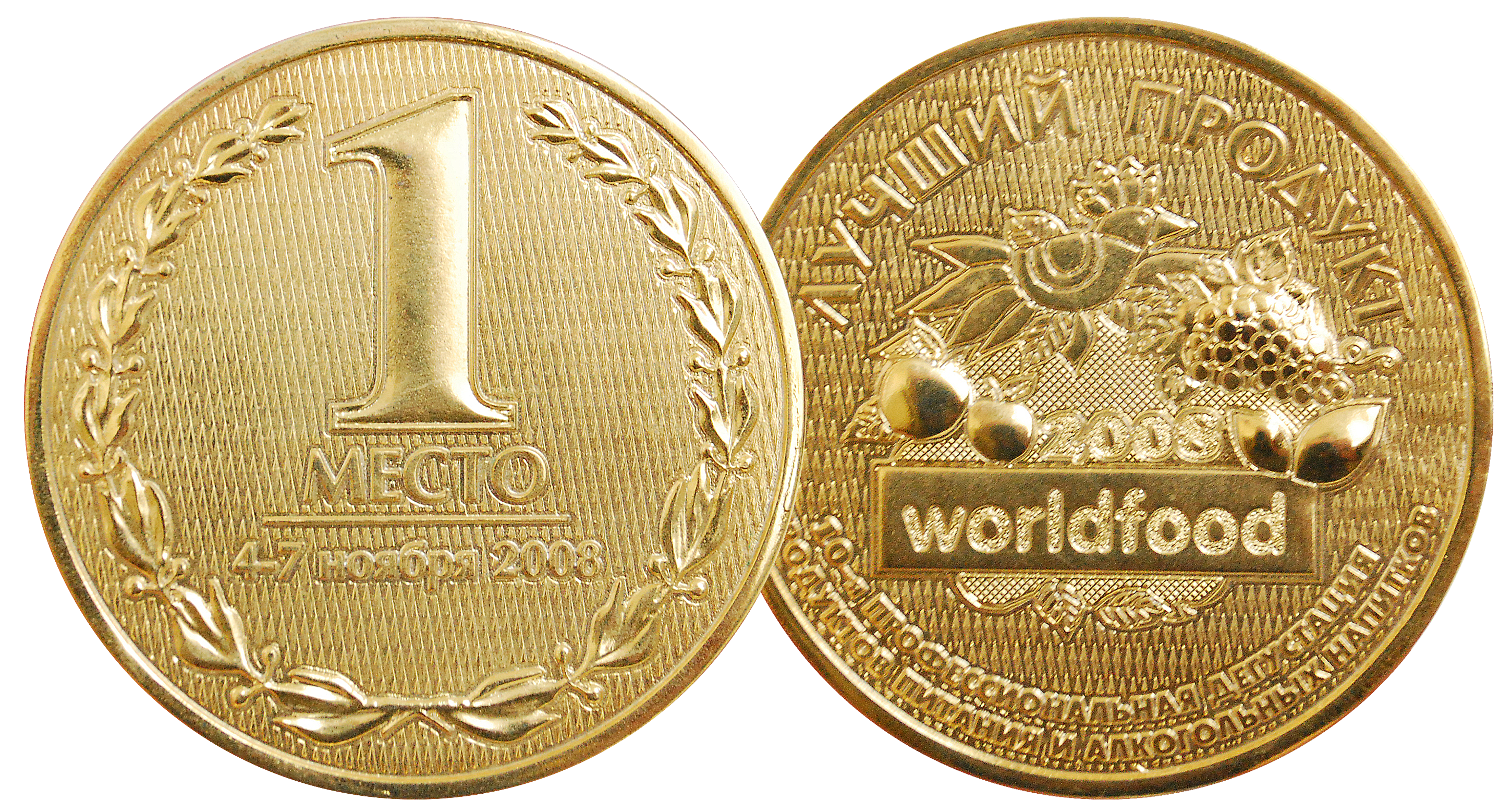